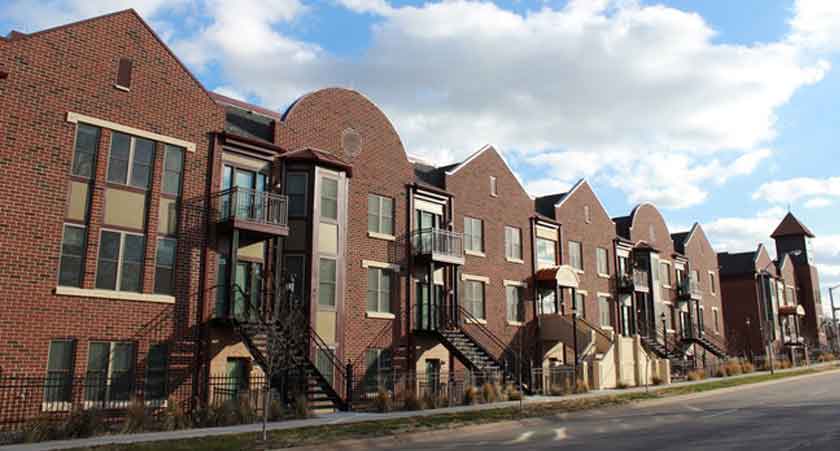 Jack Hatch and Ryan Galloway are teaming up to construct 18 affordable-housing units in central Des Moines.

The partnership, MLK Brickstone LP, is a joint venture between Hatch, owner of Hatch Development Group LLC, and Galloway, a Hatch employee who owns the proposed development site. The 18-unit build-out at 1039 19th St. is phase one of the developer’s overall plan for 59 low-income apartments in the 1000 block of 19th Street.

“Theoretically, you wouldn’t need a car to live here,” Galloway said, due to the site’s proximity to shops on University Avenue, two neighborhood parks and downtown.

Galloway, who has spent about the past four years acquiring seven parcels in the area in anticipation of the project, said his inspiration came from the Woodland Avenue Brickstone at 1500 Woodland Ave.

Galloway happened to drive by the 56-unit mixed-income apartment community shortly after moving from Iowa City to Des Moines in May 2004. “I thought it was a cool concept,” he said. “The way it framed the street, it made for a walkable neighborhood.”

In October 2008, the Des Moines City Council passed a resolution to rezone the 19th Street property to Neighborhood Pedestrian Commercial (NPC) from Multiple-Family Residential, which allows for a greater density of units in a smaller area and shorter setbacks from the sidewalk, and is generally more conducive to pedestrian-friendly neighborhoods.

“It looks like it is designed for people rather than cars,” Galloway said. Without the NPC zoning, which is allowing for the redevelopment of the property, “you kind of loose the sense of relationship with the street,” he said.

Galloway’s interest in the Woodland Avenue project, which Hatch developed, led him to begin researching how the financing for affordable-housing projects is put together. And in May 2008, he began working for Hatch Development, the developer of about 115 affordable-housing units in Des Moines.

One funding source for the projected $3.3 million MLK Brickstone project, including an estimated $2.2 million cost of construction, is $214,286 in federal housing tax credits allocated by the Iowa Finance Authority (IFA). Midwest Housing Equity Group Inc., an Omaha-based tax credit syndicator, has committed to purchasing the low-income housing tax credits (LIHTCs) for 70 cents on the dollar, IFA spokeswoman Shawna Lode said. The IFA had initially reserved more than $366,000 in LIHTCs, which are allocated annually for 10 years, but the developer was unable to secure an investor for that amount, she said.

“The tax-credit pricing dropped significantly in recent years,” Galloway said, adding that affordable-housing projects such as this wouldn’t be possible today without the “gap financing” administered thorough various federal, city and state agencies.

To help close the financing gap caused by low returns on the sale of LIHTCs on the secondary market, as traditional buyers struggling with decreased profits or even losses due to the down economy have less need to offset taxable income through the purchase of tax credits, MLK Brickstone obtained three loans through two federal programs.

The project was awarded $1,106,115 in Tax Credit Assistance Program (TCAP) funds, a federal economic stimulus package program administered by the IFA that provides zero percent cash-flow loans to LIHTC projects that are repaid over a 17-year period.

It also received two 30-year zero percent loans totaling $850,000 from the U.S. Department of Housing and Urban Development’s HOME Investment Partnerships Program, which provides federal grant money that state and local governments allocate in an effort to create affordable housing for low-income households. The $600,000 and $250,000 loans were approved by the Iowa Department of Economic Development and the city of Des Moines, respectively.

The federal authority’s use of city and state agencies to dole out the funds “gives the local government a voice,” Galloway said.

During a review of the proposed site by the city, as stipulated for projects that receive federal funding, the State Historic Preservation Office found that a century-old building located at 1039 19th St. is eligible for inclusion in the National Register of Historic Places and must be moved to another location before the project can advance.

Robert McCammon, who in 2008 received national attention for his move of the historic Murillo Building to Sherman Hill from the intersection of 14th and High streets downtown, has been slated for that job. He was expected to begin work on Nov. 20.

“The big step is to close on the limited partnership agreement with our syndicator,” Galloway said, adding that an investor has agreed to provide $1.5 million in equity for the project.

Koester Construction Co. Inc. has been selected as the project’s general contractor and Walker Architects P.C. is the project architect. Jeffrey Morgan, the initial designer, said he has scaled back his architectural firm and is now working only on smaller private design and consulting projects while teaching at Iowa State University.

The project is slated to be completed by February 2011. The developer will begin working to finance the project’s second phase, an additional 41 units, once phase one is under way.