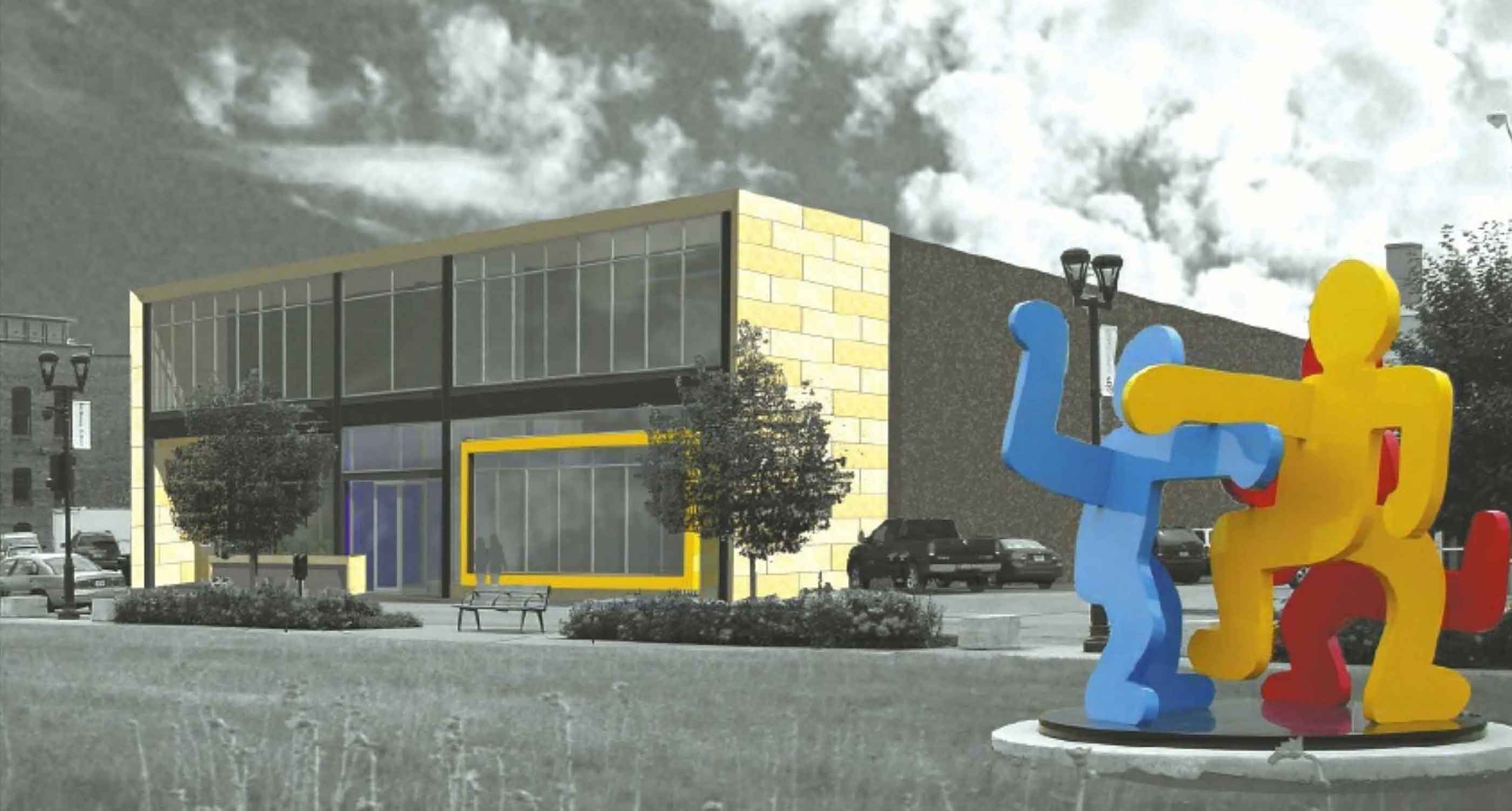 Westgate Partnership LLC kicked off its redevelopment of the Kruidenier Cadillac Automobile Co. Building last week after signing a new tenant and securing funds to tackle the multimillion-dollar project.

As the 10-year lease on its office at 501 S.W. Seventh St. in Hubbell Realty Co.’s Riverpoint West development nears expiration,Flynn Wright has finalized the terms of a new agreement that its CEO said will boost the agency’s profile when it moves to 1408 Locust St. in Western Gateway Park.

Westgate Partnership, an investment group owned by Democratic Iowa Sen. Jack Hatch and Republican businessman Bruce Rastetter, plans to spend approximately $1.85 million on exterior improvements and an additional $650,000 to construct an interior shell across the street from the John & Mary Pappajohn Sculpture Park.

Flynn Wright, the lineage of which dates back to 1919 – the same year the Kruidenier Building was constructed to house Iowa’s first Cadillac dealer – is expected to take possession by Dec. 1.

During its search for new office space, the company looked at about a dozen downtown locations. It toured the Locust Street property in June 2010, after Flynn Wright’s agent identified it and initiated contact with Aaron Hyde, a broker with Ferguson Commercial Real Estate Services.

“When we first toured it, you really had to use your imagination, because it’s pretty cut up,” Flynn Wright CEO Andy Flynn said of the Kruidenier Building, which from March 2009 to April 2011 was occupied by the Des Moines Social Club. “Until you get into that process, you really don’t know what’s available. It’s a fun time to kind of dream about all the possibilities.”

But Garvey said brokering transactions is only one facet of Proxymity’s aim to help customers make informed decisions about the spaces they own or occupy. Acting as a “proxy” for decision makers who would otherwise be distracted from the operations of their core businesses, he said Proxymity collaborates with designers, construction managers, lenders, accountants and a myriad of other industry experts to determine customers’ needs and gauge their requirements before rushing into the marketplace in search of commercial space.

“We give the client the ability to look ahead, to look around the corner,” Schlueter said.

Both he and Garvey said they have seen companies derailed by the intricate details involved with the lease, purchase, development and utilization of commercial space. Both men operated their own real-estate related companies before launching Proxymity in February.

“What Proxymity did was help affirm our vision as an organization so this transaction could sync with that vision,” Flynn said. “Some companies might start working with someone on step two or three of this process. Proxymity started with us from the first step before we even selected a space. Because of that, this became less about the space itself and more about our actual environment.”

One player in the Kruidenier Building deal is Matt Coen, owner of StudioCOEN Architects in Des Moines. Coen, who contracted with Proxymity to provide expertise in the proposed project’s design-and-preconstruction phase, has now been selected as the project architect for both the exterior and interior build-outs.

He said the general contractor, Koester Construction Inc., will modernize the building’s east and west façades with sections of limestone quarried from Minnesota, giving it a sleek, high-end finish. Intended to complement the late artist Keith Haring’s untitled sculpture commonly known as “Three Dancing Figures” in the art park, the building’s color scheme will include variations of the blue and yellow hues on Flynn Wright’s insignia.

“Visibility was a huge factor for them,” Coen said, noting that the north-facing window of the ad agency’s conference room will offer direct views of the Nomade, one of the most recognizable works of art in the park. “We wanted their workflow to be in sync with their workspace,” he said.

Ferguson broker Shannon Morton, who spearheaded Westgate Partnership’s lease negotiation with its newest tenant, said he and Hyde have represented landlords in leasing more than 20,000 square feet of space in Western Gateway Park during the past three months.

Last year, Morton and Hyde represented Westgate Partnership in leasing the majority of space that remained in the Chamberlain Building at 1312 Locust St. Renovated and reopened in July 2008, the property adjacent to the Kruidenier Building is now nearly 100 percent occupied and will soon include the addition of Americana LLC, a full-service restaurant and bar.

“Once I realized we were going to put in the sculpture garden, I knew the art would make the real estate much more valuable,” said Morton, who returned to Iowa in early 2008 after graduating from the NYU Schack Institute of Real Estate and starting his brokerage career with The Vortex Group LLC in Manhattan.

“It creates a centerpiece for conversation,” he said of the $40 million worth of donated art in Western Gateway Park, a downtown civic space conceived about 20 years ago by New York-based Agrest and Gandelsonas Architects LLP. “Small talk goes a long ways,” Morton said. “But you actually have something to talk about when you’re a corporation and somebody comes in from out of town.”

To fund the estimated $4.6 million cost to remodel both the exterior and interior of the building to suit Flynn Wright, Hatch said Westgate Partnership will refinance an existing real estate loan, leverage Westgate Partnership’s equity in the Kruidenier Building and plans to secure a new $3.2 million mortgage from West Bank.

“It was a lot more difficult just coming out of a recession,” Hatch said of his long-term plans for 1408 Locust. “My partner and I are still taking a huge risk. That’s the business we’re in. We believe in the area, we believe in the process, we believe this is going to be a great location for future development.”

He and Rastetter will personally guarantee the loans, he said.

Westgate Partnership had originally applied for federal historic tax credits to help offset renovation costs. However, because the façade of the Kruidenier Building is less than 50 percent intact, Hatch said the building didn’t meet the National Parks Service’s criteria for those incentives.

Ten percent of Westgate Partnership’s construction costs will be offset by a federal tax credit that is applied to the redevelopment of historic properties based on their ages, Hatch said. The city of Des Moines is also expected to commit a $250,000 economic development grant to be paid in 10 annual installments.

And though Hatch said he can’t command the lease rates he had expected in 2006, when Westgate Partnership first purchased the Kruidenier Building for a little more than $1 million, it will cash flow.

“But no one is going to be making piles of money on this,” Hatch said. “You probably wouldn’t do these buildings in the kind of environment we’re in, because there is still a great deal of uncertainly in this global market.”

“I think we’ll all be surprised at how the landscape in the Western Gateway changes over the next 24 months,” Morton said, noting that about 6,000 to 7,000 square feet of leasable space is available on the Krudenier Building’s east side. “At the end of the day, get emotionally attached to how the deal is done to make money, not to the real estate itself. If you put 1408 Locust on Walnut Street, I strongly believe that the deal wouldn’t have happened. The deal was done because of the art.”

Flynn Wright was founded in 1984 by Flynn’s father, Pete Flynn Sr., when he merged his family’s business with another company. Flynn said the marketing firm, which specializes in research, public relations and interactive media, expects to handle $40 million to $45 million in capitalized billings this year.

“We’ve always believed our environment allows our team to maximize their creative potential to the benefit of our clients,” Flynn said of his 45 employees. “Our move to this new space invites that collaboration and reinforces our commitment to Des Moines.”

The deal closed on April 8. Hatch said Flynn Wright’s gross effective rents landed in the range of $18 to $20 per square foot. The company signed a 10-year lease with two five-year renewal options.

“If you look at the Western Gateway and what they’ve done, and envision yourself and your location being right there across from that park, it just seemed like a perfect match for us,” Flynn said.