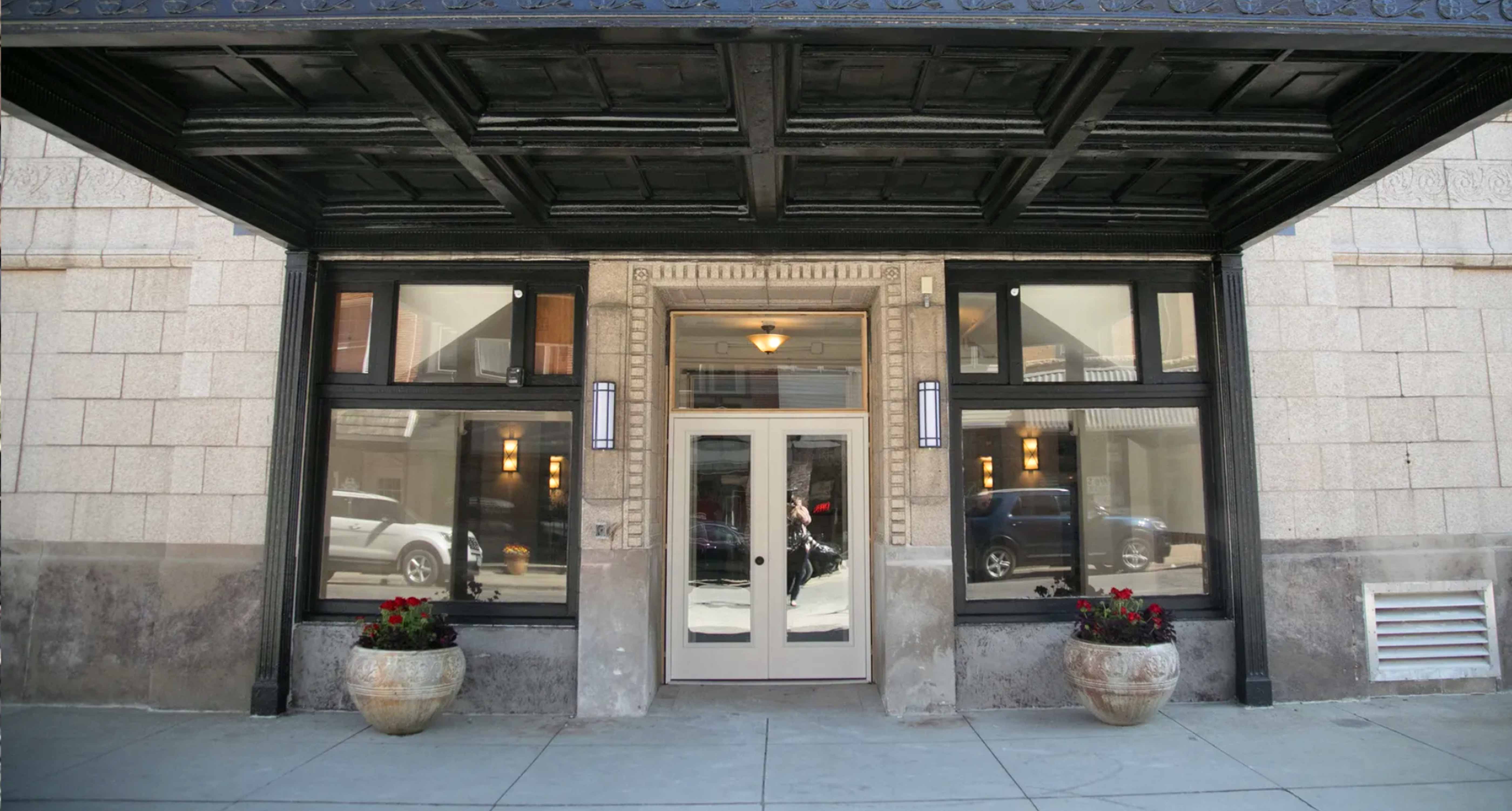 The project restores a unique piece of Newton history and provides needed affordable housing in the mid-size city of roughly 15,100.

“There’s not one person who has come up to me from Newton who doesn’t have a great story (about the Hotel Maytag),” developer Jack Hatch said. “One gentleman got married here, there have been class reunions here. Salesmen from Maytag had monthly meetings here.”

Located in the Newton Downtown Historic District, across from the Jasper County Courthouse, the Hotel Maytag Apartments feature 45 units, including 39 that are reserved for low- to moderate-income tenants.

The exterior of the Maytag Hotel Apartment building is seen. 17 of the 45 apartments have already been leased. (Photo: Amy Doerring/Special to the Register)

The Hotel Maytag opened just days before Christmas in 1926.

It was built by Maytag Corporation founder F.L. Maytag to give the company’s washing machine salesmen a place to stay when they were in Newton, said Larry Hurto, chairman of the Newton Historic Preservation Commission.

The hotel originally boasted more than 100 rooms as well as fifth-floor apartments. Maytag even had his own suite of rooms for entertaining, Hurto said.

Designed by Henry Raeder, it has a Chicago-commercial style and was the first hotel west of the Mississippi to have air conditioning, according to Hurto.

The building was later split into apartments and offices. It began to fall into disrepair in the 1960s.

The Capitol Theatre lobby in the Historic Maytag Hotel is seen. Before it was renovated, the theater had leaky pipes and lighting issues among other troubles. (Photo: Amy Doerring/Special to the Register)

Determined to save the building, Newton city officials purchased the hotel for $412,000 in 2016. The city turned over the deed to Hatch Development Group a year later.

“We told them we could renovate this, but we would need their help,” Hatch said. “The City Council, the mayor and the city of Newton all stepped up. They knew how important this building was to their town.”

The project received public financial support, including $5.9 million in state and federal historic tax credits and about $2.9 million from the city. Additional funding came from tax credits, loans and mortgage support through the Iowa Finance Authority.

The Capitol II Theater was the first portion of the building to be renovated. It reopened last fall.

Jack Hatch says the finished work of the craftsmen is indistinguishable from the original molding in the completed restoration of the ballroom. (Photo: HDG/Special to the Register)

Reynolds toured the hotel in 2015 when Newton officials first announced plans to restore the structure.

After her most recent stop this week, she called the Hotel Maytag “an excellent example of public-private partnerships that provide affordable housing, set communities up for success and inspire the next generation’s imaginations.”

Hatch, who ran unsuccessfully for Iowa governor against Terry Branstad in 2014, when Reynolds was the lieutenant governor, said working together to bring back a piece of a small town transcends politics.

“Both of us agree that investing in rural Iowa is an important policy to pursue,” he said. “People (that) say that rural Iowa is dead just need to look at Newton.”

The Hotel Maytag renovation is one example of Newton’s efforts to provide housing and create jobs in the community. In 2014, the city established a housing initiative that provides financial incentives to for home builders, real estate developers and home buyers. For example, individuals can receive $10,000 for buying a new home, according to Newton’s website.

“Neighborhoods have been improved. There are new single-family developments and more apartments are being built,” said Erin Chamber, Newton’s community development director. “The city is working with downtown business owners to rehabilitate upper-level apartment buildings about these businesses.”

Once the “Washing Machine Capital of the World,” Newton has worked to recover after the Maytag plant closed in 2007. At its peak, the 2 million-square-foot factory employed around 3,000 people in the town.

More than a decade later, Iowa has one of the lowest unemployment rates in the country, at 2.4%.

“We’ve replaced those jobs,” Chambers said. “One key has been the wind industry. It’s been successful.”

TPI Composites now employs more than 1,000 people at its Newton facility, where it builds blades for wind turbines. It’s the town’s biggest employer, according to Newton’s website.

Public-private partnerships, like the one that made the Hotel Maytag Apartments possible, have been essential to Newton’s growth, Chambers said.

“We identify what our strengths are and work with entities to build on those strengths,” she said. “I’ve been with the city for 13 years now, but I think this history goes back longer than that. Newton has always had a real pull yourself up by the bootstraps approach.”

Gage Miskimen is a news reporter for the Register. You can reach him at gmiskimen@registermedia.com.